Flourishing trade brings prosperity to Catan. However, all this wealth also attracts barbarians. The knights of Catan are needed! The expansion can also be combined with CATAN - Seafarers and CATAN - Traders & Barbarians.

What Is It About?

Use the hexes of the CATAN base game to assemble Catan inside the provided frame. Each of you has just finished building a settlement and a city, when dark clouds gather over the peaceful island of Catan. Wild barbarians, attracted by the wealth of Catan, sail toward the island's shores. There is still enough time to prepare for confronting the intruders, though. The strength of the hostile barbarian army always corresponds to the number of cities on Catan. In order to successfully defend Catan, the knights of all players combined must be at least as strong as the barbarian army.

Knights are not used in the form of cards; instead, they are represented by wooden tokens that are placed on unoccupied intersections.Each token has an “active” side depicting a knight helmet in color and an “inactive” side depicting a black-and-white knight helmet. A knight can only fight after he is activated; activation costs one grain. After paying the grain, you turn the knight token over so that its active side is face up. Each ring on the token counts as one strength point.

If the knights of all players combined have enough strength points to defeat the barbarian army, the danger is averted for the moment. However, if the Catanian knights are too weak, a city will be raided and downgraded to a settlement.

This unfortunate event always affects the player who had the lowest total strength of active knights when the barbarians attacked. Besides defending Catan, knights can also be used to chase away the robber or to displace another player’s knight.

When you are not busy defending Catan, you are competing for the metropolises, which represent two additional victory points. In order to establish a metropolis (which is placed on top of a city), you first need to improve your cities.

The construction of city buildings, such as the Library, Market, Abbey, or Town Hall, is indicated on development flip-charts

You pay for city improvements with commodities such as coins, cloth, or books. How do you get commodities? Instead of two resources, cities adjacent to mountains, pasture, and forest hexes produce only one resource but also one commodity derived from the respective type of resource.

With increasing city improvements, the odds to obtain new progress cards become more favorable. Cards such as “Mining,” “Irrigation,” or “Building Crane” allow for faster settlement activities. Cards such as “Merchant,” “Merchant Fleet,” “Trade Monopoly,” or “Resource Monopoly” create advantages with regards to trade. On the other hand, you can bother stronger players with cards such as the “Deserter,” “Spy,” or “Diplomat.”

Get used to a tougher life on Catan – and a longer but also more exciting game. The first player to reach 13 victory points is the winner.

In Cities & Knights, you roll 3 dice at the beginning of your turn: 2 production dice and 1 event die. 3 sides of the event die show the barbarian ship. This means, there is a 50% chance per turn for the barbarian ship to come one step closer to Catan. Considering this circumstance, it may take only 3 or 4 turns until the barbarian ship lands on Catan.

Therefore, it is important to start building knights early in the game and to activate them. Such preparation will help you avoid being the target of the barbarian army, i.e., losing a city. Grain is very important for defending Catan. Knights are of no use as long as you don't have grain to activate them.

Personally, I am not a big fan of such variants. One major appeal of the game is attributable precisely to the threat of the barbarian army,which you have to prepare for as early in the game as possible and include in your strategic planning.

Combination with the Seafarers Expansion

You can use the possibilities of the Seafarers expansion together with Cities & Knights. In our experience, scenarios such as Heading To New Shores and Through the Desert are suitable. The exploratory scenarios and all other scenarios with many smaller islands are unsuitable. When playing with the Seafarers Expansion, you must ensure that certain actions applying to roads are also possible for ships.

Rules for Cities and Knights with the Seafarer Expansion

In Explorers & Pirates, building cities is not allowed; you build harbor settlements instead. This makes sense when playing Explorers & Pirates independently of other expansions, because its strategic emphasis is on exploration and transporting commodities, crews, and settlers.

In Cities & Knights, the strategic emphasis is on city expansion and city defense.

Theoretically, it is possible to combine the two expansions and thus create a game that provides an even larger variety of strategies and possibilities to win.

If you want to combine these two expansions, you should be aware that the resulting game is rather complex and perhaps even a bit confusing. However, a group of players who know both expansions well may definitely give it a try. At least for the first attempt, scenario 4 with its Fish for Catan and Spice for Catan missions should be used

B) Setting Up the Starting Island

When choosing the terrain hexes from the “Catan” base game to set up the starting island, remove 1 forest hex and add 1 fields hex instead.

Instead of building a settlement, each player builds a city and thus begins the game with 1 harbor settlement and 1 city.

Knights cannot be transported by ship. Therefore, they stay on the island where they were built. Unlike crews, knights you have built on an island occupied by a pirate lair are not allowed to participate in the battle for the pirate lair. You are not allowed to use them as merchants in the villages of the spice hexes either.

When determining the strength of the barbarians, all cities are considered – that is, the cities on the starting island as well as the cities in the discovered areas. Harbor settlements are not included in the count.

The strength points of all knights are also taken into account.

Crews are not counted for the defense of the cities against the barbarians.

You are not allowed to buy commodities from the supply by paying gold.

If you have the “Fast Gold” advantage, instead of a resource you may also sell a commodity for 1 gold.

If you have built the Aqueduct, and the production roll (not considering the “7”) doesn't provide you with any resources, you may take – according to the Cities & Knights rules – any 1 resource of your choice. In addition, under the Explorers & Pirates rules, you receive 1 gold.

J) End of the Game

I recommend to calculate the victory points required to win the game as follows:

Combining scenario 4 of Explorers & Pirates with Cities & Knights would result in 22 victory points.

Many of the Traders & Barbarians scenarios combine well with Cities & Knights and the scenarios of the Seafarers expansion. Please find possible combinations in the below PDFs for download:

You can settle Catan and use knights to defend your cities against barbarians with up to 6 players.

You can combine the expansion Cities & Knights with these expansions and scenarios.

Legend of the Conquerors

This CATAN expansion is entirely dedicated to exploration!
Image

We have collected important questions and answers about the Cities & Knights expansion. Just follow the link. 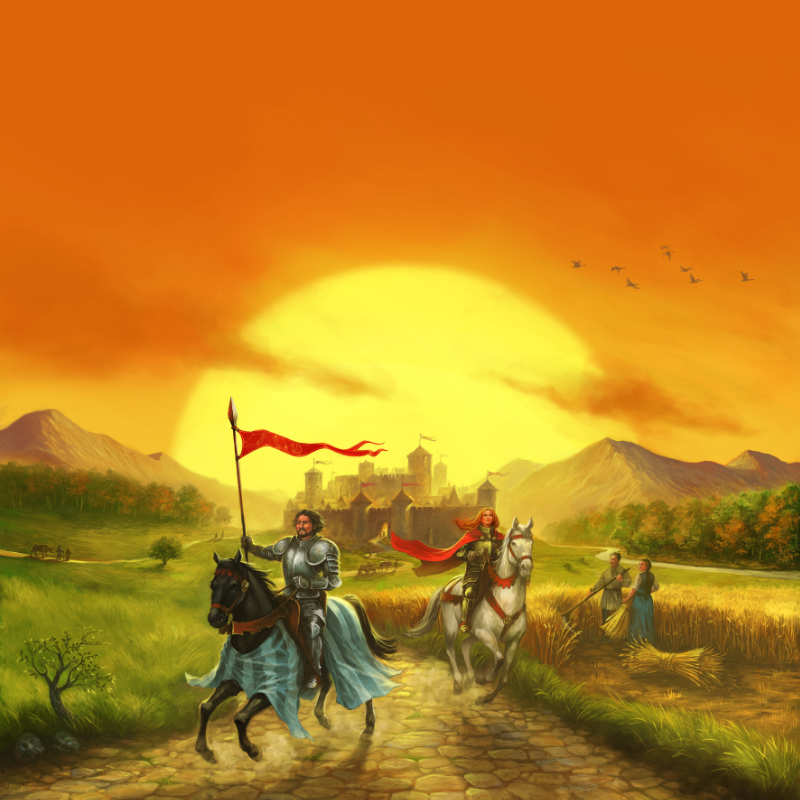