This CATAN expansion is entirely dedicated to exploration!

Sent out by the Council of Catan, you set out for uncharted areas to build new outposts. The sketchy information available indicates that dangerous pirate lairs, rich fishing grounds, and helpful indigenous villages await you beyond the horizon.

To set up the game, you need the game components from the CATAN base game as well as new frame pieces and hexes from the expansion. This provides you with a quite large game board, allowing you to go on exciting journeys of exploration and discover new land.

The Explorers & Pirates expansion is based on the CATAN base game rules but also contains a number of new game mechanisms. For example, ships are now equipped for expeditions and can be moved freely across the board. In the ships you transport settlers, crews, fish, or spices across the seas. Your goal is to build new outposts on the islands that are still undiscovered and to complete the Council of Catan's missions in the most skillful way possible.

Your missions are varied. First, you must prevail against pirates who terrorize the coasts of Catan. Equip your ships with crews and search for the pirates' lairs. The Council of Catan rewards the bravest fighters with fame and gold.

On your way, you will encounter rich shoals of fish just waiting to be hauled aboard your ship. If you bring the fish back to the home island, the Council of Catan rewards you.

Finally, you will encounter peaceful and helpful villagers who trade valuable spices to you. The Council of Catan will be delighted yet again when you deliver spices to their stronghold. You also benefit from the villagers' extensive knowledge and will learn how to sail faster across the seas or how to better fight the pirate ships.

In Explorers & Pirates, building cities is not allowed; you build harbor settlements instead. This makes sense when playing Explorers & Pirates independently of other expansions, because its strategic emphasis is on exploration and transporting commodities, crews, and settlers.

In Cities & Knights, the strategic emphasis is on city expansion and city defense.

Theoretically, it is possible to combine the two expansions and thus create a game that provides an even larger variety of strategies and possibilities to win.

If you want to combine these two expansions, you should be aware that the resulting game is rather complex and perhaps even a bit confusing. However, a group of players who know both expansions well may definitely give it a try. At least for the first attempt, scenario 4 with its Fish for Catan and Spice for Catan missions should be used

B) Setting Up the Starting Island

When choosing the terrain hexes from the CATAN base game to set up the starting island, remove 1 forest hex and add 1 fields hex instead.

Instead of building a settlement, each player builds a city and thus begins the game with 1 harbor settlement and 1 city.

Knights cannot be transported by ship. Therefore, they stay on the island where they were built. Unlike crews, knights you have built on an island occupied by a pirate lair are not allowed to participate in the battle for the pirate lair. You are not allowed to use them as merchants in the villages of the spice hexes either.

When determining the strength of the barbarians, all cities are considered – that is, the cities on the starting island as well as the cities in the discovered areas. Harbor settlements are not included in the count.

The strength points of all knights are also taken into account.

Crews are not counted for the defense of the cities against the barbarians.

You are not allowed to buy commodities from the supply by paying gold.

If you have the “Fast Gold” advantage, instead of a resource you may also sell a commodity for 1 gold.

If you have built the Aqueduct, and the production roll (not considering the “7”) doesn't provide you with any resources, you may take – according to the Cities & Knights rules – any 1 resource of your choice. In addition, under the Explorers & Pirates rules, you receive 1 gold.

J) End of the Game

I recommend to calculate the victory points required to win the game as follows:

Combining scenario 4 of Explorers & Pirates with Cities & Knights would result in 22 victory points.

Combination with the Traders & Barbarians expansion

Since there is no robber in Explorers & Pirates, a combination is not possible.

Many cards refer to game components such as the robber, knight cards, or harbors, which do not exist in Explorers & Pirates. Even so, you can use the cards if you ignore the events and only consider the depicted numbers.

Since there are no harbors in Explorers & Pirates, this variant makes no sense.

d. The Fishermen of Catan

This scenario combines well with Explorers & Pirates if the following modifications are made:

e. The Rivers of Catan

However, because of the 2 swamplands forming part of the 2 rivers, 2 terrain hexes would have to be removed, that is, 2 terrain hexes on the starting island would not produce. In addition, the swampland of the longer river would occupy an area where a harbor settlement could be built, which, in a 4-player game, would put one of the players at a disadvantage. Therefore, I'd advise against combining this scenario with Explorers & Pirates. If nevertheless you want to try this combination in a 2- or 3-player game, you should place the rivers so that the swampland of the shorter river occupies the upper hex space marked with an “11” and the swampland of the longer river occupies the hex space marked with a “5”. In this case, remove the terrain hexes of the type depicted on the rivers as well as 1 mountains hex and 1 pasture hex from the terrain hexes designated for the starting island.

Only in combination with the CATAN base game can these two scenarios be played in a balanced fashion. There is see no possibility of combining them with Explorers & Pirates.

Combination with the Seafarers Expansion

In the Seafarers expansion, you build ships adjacent to each other, thus forming shipping routes along the sea hexes that connect the islands. If your shipping route has reached a new island, you may build a settlement there. With two exceptions, the rules for ship building are the same as for road building in Seafarers. The first exception is that roads may not be built on sea routes and ships may not be built on paths. The second exception is that open ships may be moved.

While in Seafarers, the ships are strung together in a static fashion, in the Explorers & Pirates expansion, the ships can cross the seas like real-world ships. If your ship, which has been loaded with a settler, reaches a new island, you may build a settlement there.

In these two expansions, the ways of using ships and settling new islands are so fundamentally different from each other that it is impossible to combine the expansions. Besides, combining them doesn't make much sense anyway. If you use a settler ship, you reach a new building site for a settlement faster and more cost-effectively than when stringing together various ships.

In February 2013, the fourth large expansion for CATAN was released for German-speaking countries on the occasion of the Nuremberg International Toy Fair. The first three expansions – Seafarers, Cities & Knights, and Traders & Barbarians – had been released in 1997, 1998, and 2007, respectively.

Here you can find the corresponding blog posts written by Klaus Teuber on how the expansion was developed:

Up to 6 players can settle Catan and enjoy the missions with pirate lairs, fishing grounds, and indigenous villages.

You can combine the Explorers & Pirates Expansion with these expansions and scenarios.

We have collected important questions and answers about the Explorers & Pirates expansion. Just follow the link. 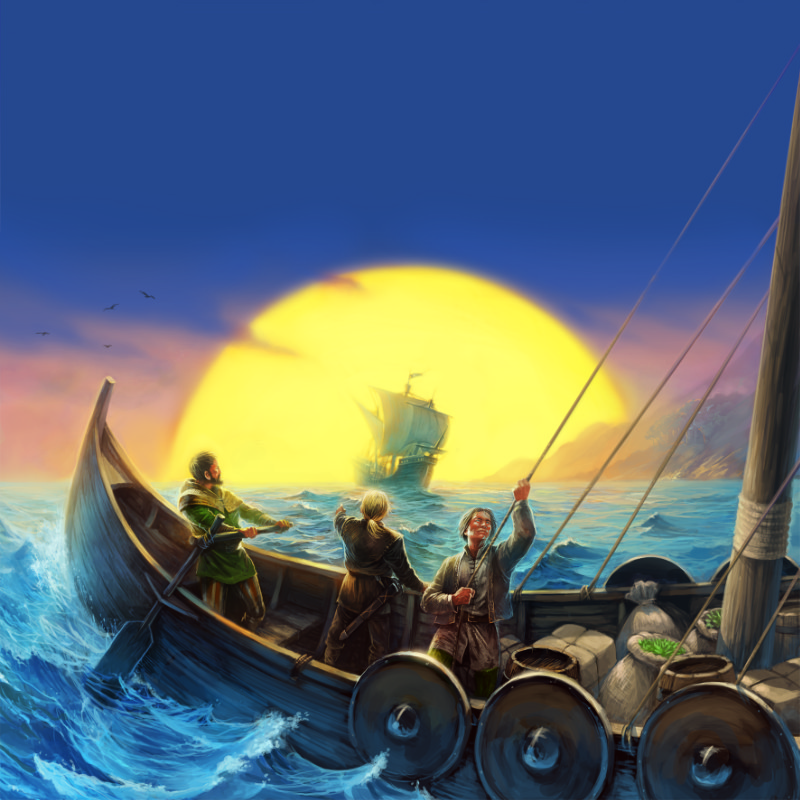