Picture yourself in the era of discoveries: after a long voyage of great deprivation, your ships have finally reached the coast of an uncharted island.

Its name shall be Catan! But you are not the only discoverer. Other fearless seafarers have also landed on the shores of Catan - the race to settle the island has begun!

The women and men of your expedition build the first two settlements. Fortunately, the yet uninhabited land is rich in natural resources. You build roads and new settlements that eventually become cities. Will you succeed in gaining supremacy on Catan? Barter trade dominates the scene. Some resources you have in abundance, other resources are scarce. Ore for wool, brick for lumber - you trade according to what is needed for your current building projects. Proceed strategically! If you found your settlements in the right places and skillfully trade your resources, then the odds will be in your favor. But your opponents are smart too.

First published in Germany in 1995 as Die Siedler von CATAN, then in English as The Settlers of CATAN in 1996, CATAN celebrates its 25th anniversary in 2020.

To begin the game, you build the game board using hexagonal terrain tiles. Catan is born - a beautiful island with mountains, pastures, hills, fields, and forests, surrounded by the sea.

Each of you places two small houses on spaces where three terrain hexes meet. They are your starting settlements.

And so it begins. The starting player rolls two dice. An “11!” Each terrain hex is marked with a number. Each player who owns a settlement adjacent to a terrain hex marked with the number rolled receives a resource produced by this hex. Hills produce brick, forests produce lumber, mountains produce ore, fields produce grain, and pastures produce wool.

You use these resources to expand across Catan: you build roads and new settlements or upgrade your existing settlements to cities. For example, a road costs 1 brick and 1 lumber. If you do not have the necessary resources, you can acquire them by trading with your opponents.

I lost my first game of CATAN resoundingly. Well, nobody had told me that with two dice the numbers 6 and 8 are rolled much more frequently than the numbers 2 and 12. As you can imagine, I hardly received any resources for the settlement I had placed between terrain hexes marked with the numbers 2, 12, and 3. I wrote down a couple of tips for you, so you can avoid having a similar experience. I'll also give you a description of two variants I like to play.

If you roll 2 dice 36 times, the statistical distribution of the results is as follows:

This shows that the closer the numbers are to 7, the more frequently they are rolled. Therefore, at least at the beginning of the game you should build settlements adjacent to terrain hexes marked with numbers close to 7.

You should make sure that your first two settlements are adjacent to all terrain types if possible. This is the only way to receive as many different resources as possible, thus avoiding expensive trades with the bank.

Harbors are of particular importance if you can expect a good production of a particular resource.
For example, if you have settlements adjacent to pasture hexes marked with good numbers, you should, as soon as possible, build a settlement on a coastal intersection next to the 2:1 wool harbor. Then you can trade 2 wool for any 1 other resource of your choice.

If you trade cleverly, you improve your chances to win the game. Trading with an opponent gives you and your opponent an advantage over the other players. The less you trade, the more advantages you are giving away.

A little bit of complaining at the right time often works wonders. The likelihood of receiving better trade offers increases, and the robber avoids your terrain hexes. But don't overdo it!

The following variants are highly recommended:

2. Trade and Build in Any Order

The "first trade, then build" order is no longer observed. The players may trade, then build, trade again, build again, etc.
If you play according to this variant, you also may immediately use a newly built harbor for maritime trade (trade with the bank at an improved rate).

You can settle Catan with up to 6 players.

If you want to play the CATAN base game with 5 or 6 players, just add this base game extension.

You can play the CATAN base game with various expansions. You can also combine the different expansions.

While expansion is the hallmark of “Seafarers” and “Cities & Knights” stands out because of its intricacy, "Traders & Barbarians" is characterized by variation.
Image

This CATAN expansion is entirely dedicated to exploration!
Image
Image

CATAN Universe is the ultimate multi-platform version of CATAN for smartphone, tablet, PC and Mac.

Play the original CATAN adaptation including many expansions online with people from all over the world or compete against clever computer opponents. An account allows you to play on all available platforms.

The Trading Post can be used for card storage and to hold the cards for easy access during gameplay.

Cards and dice not included.

Designed for the English-language edition of CATAN.

Alvailable in the CATAN Shop as

We have collected important questions and answers about the CATAN base game. Just follow the link. 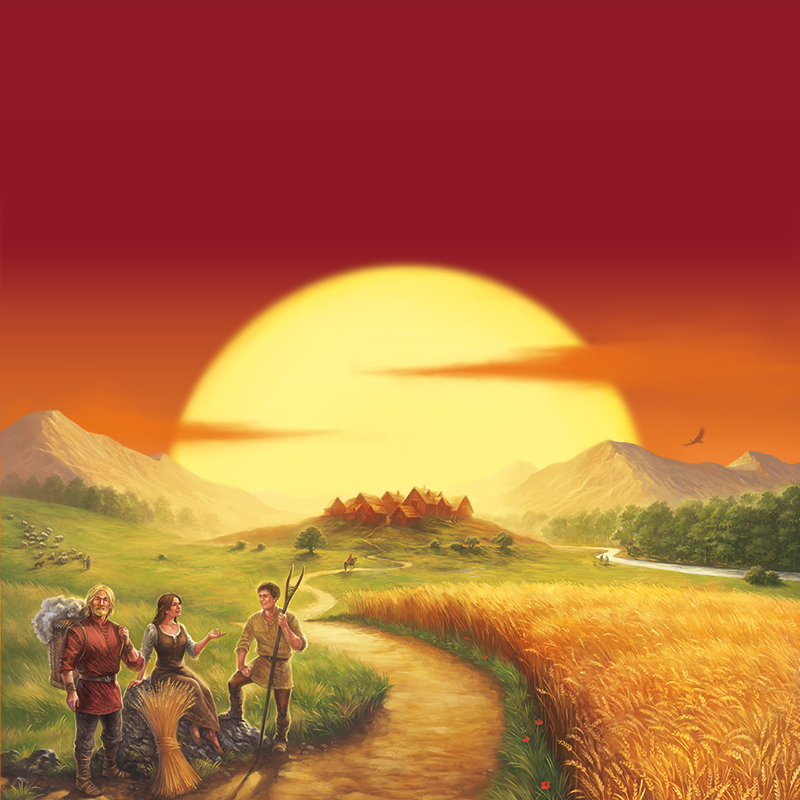