Preparation of the game is easy. Instead of assembling the island of Catan, you simply extend the Hesse game map. You need the cards and game pieces of the CATAN base game.

The intersections marked with a victory point symbol are new. At the beginning of the game, here you place either a CATAN chit from the Seafarers expansion or any other marker, e. g., a coin. The first player to reach a victory point intersection with a chit or marker on it by road receives that chit/marker and thus obtains a victory point.

The game map reflects the geographical features of Hesse. The positions of the cities roughly correspond to their actual geographical position, and the distribution of the terrain hexes also corresponds to Hesse's geography. For each city, Andreas Steiner created an image of its landmark, and a short text informs about the landmarks' significance. During play, in a very casual fashion you'll also learn interesting facts about Hesse and some of its cities.

The Hesse edition can be played by 3 or 4 players. If you use the CATAN for Two variant, the game can also be played by 2 players. 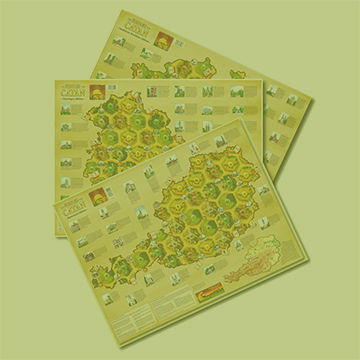