Image
Image
Extension for 5 to 6 players

A Game of Thrones CATAN - Extension

–Tyrion Lannister, A Game of Thrones

This is not a stand-alone game. It requires a copy of A Game of Thrones CATAN to play.

Jeor Mormont continues to seek a successor from among the Brothers of the Night’s Watch. Only one who can improve the failing infrastructure of the Gift and restore the guards who defend the Wall will be able to take the reins and lead the Order through the coming winter. But the struggle for power among the brothers becomes more difficult with each passing day. The forests of the North conceal many mysteries, and the wildlings still have a few tricks up their sleeves. Brutish beasts clamor towards the Wall, and if you wish to uphold your vows to defend the realms of men, you will need to call upon new allies and use every ounce of your cunning to outwit your enemies beyond the Wall and within the Watch.

Forge Your Destiny
The northern region known as the Gift was bestowed on the Night’s Watch thousands of years ago. This fertile land provides the Watch with lumber, brick, wool, grain, and ore. At least, it used to. As the Watch has become forgotten by the lords and ladies of Westeros, the infrastructure of the Gift has fallen into disrepair and the Lord Commander, Jeor Mormont, is willing to give anything to one who can restore the Gift to its former glory, even naming them as his successor.

In the A Game of Thrones CATAN: Brotherhood of the Watch 5-6 Player Extension, you and up to five rivals have the chance to step into the role of brothers of the Night’s Watch, locked in fierce competition to become the next Lord Commander. As before, you'll do this by building roads, settlements, and keeps; purchasing development cards; and recruiting loyal guards to defend the Wall on your behalf. As two more brothers join the competition, you have been permitted to develop a larger area of the Gift, with new tiles and trade routes to accommodate either a five- or six-player game.

Additionally, each brother now has more chances to build and show their worth with the introduction of a special build phase after each player's turn. During this phase, all other players may choose to build or buy anything that they can afford with their resources - and making the most of these new opportunities can set you apart from the others.

Friends of the Watch
With new rivals and more opportunities for alliances, intrigues, and betrayals, it's more difficult than ever for you to stand out and earn the respect of Old Bear Mormont. If you wish to convince your brothers that you are the worthiest, you will need to call upon new allies and their unique skills. The A Game of Thrones CATAN: Brotherhood of the Watch 5-6 Player Extension provides you with four new hero cards to bring even more iconic characters to the hero display. One of the new members of the Watch, the honorable Jon Snow, uses his connection to the wildlings to protect you from the robber Tormund Giantsbane, either allowing you to keep your resources when a “7” is rolled or even helping you gain more resources with his intimate knowledge of the North.

Otherwise, you may find that you need to reach beyond the constricts of the Order and contract the help of the very wildlings you have tried to defeat. If you can convince Osha to act as an informant on the freefolk, you can slip past the wildlings and gain resources from occupied spaces. Using this ability even once can give you the final piece you need to earn your victory. Once you're Lord Commander, no one need ever know about your more questionable alliances.

But you will find that not all wildlings are as helpful as Osha. Not only does this extension introduce two new wildling clans for you to contend with, but they are stronger than ever with the addition of mammoths to their ranks. When these thunderous brutes charge the Wall, the very ground shakes and even the most stalwart warriors flee in fear of their lives. Similar to the wildlings that drive them, mammoths begin the game in the distant Frostfangs. But with each roll of the wildling die, there comes the risk that they will move south along the forest trails, closing in on the section of the Wall that you are tasked to defend.

When mammoths reach a clearing at the base of the Wall, they will not cross it even during a breach. Instead, the number of mammoths present determines how the wildlings themselves will act. If there are an even number of mammoths in a clearing, all wildling crossings occur normally, but if there are an odd number of mammoths, the wildlings change direction! You may think that your section of the Gift is safe, only to find that the wildlings are coming for your settlements instead. But if you can defend the Gift against the coming storm and stave off the newfound foes from beyond the Wall and within the Watch, it will make your victory all the sweeter!

Sword in the Darkness
The battle for power may have changed, but your ambitions have not. Bring new allies into the fold, confront the increased challenges of the North, and ensure your place as the new Lord Commander of the Night’s Watch!

A Game of Thrones CATAN

Players take on the role of Brothers of the Night’s Watch and use their resources to strengthen their hold on the north by building roads, settlements, and keeps; recruiting guards for their patrol; or buying development cards. Each of these acts bring players increased power and recognition through the awarding of victory points. 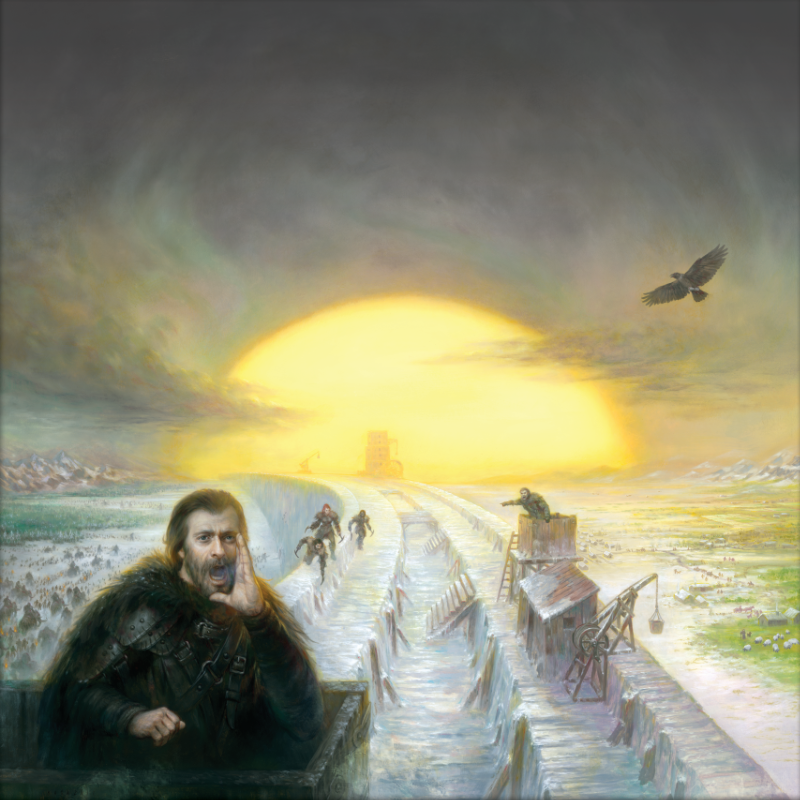